One of the most un-democratic features of today’s global system is that decisions taken in the stronger countries often have severe impacts on people living in poorer countries. Even when such impacts can have deadly consequences, as in cases of cross-border pollution, trade policy and war, the impacted people in the poorer countries are simply not allowed to participate from the decision-making, due to one of the foundational principles of today’s international system, the principle of complete national sovereignty. 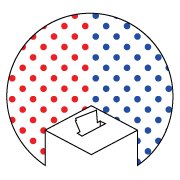 To protest against this structural injustice and breach of democratic principles, the Real Democracy Campaign aims to assist globally enlightened citizens of the stronger states to give real power in their political systems to  citizens of other countries whose lives are affected by the policies of the stronger state. Through social media, the campaign facilitates a personal connection between those who wish to ‘donate’ their vote and those affected non-citizens who wish to ‘receive’ and use it. Voluntarily, the donor votes in the national elections according to the instruction of the non-citizen receiver, thus making her a political player and giving her some influence over the so-called ‘foreign’ decisions that affect her life so much.

The campaign began before the UK 2010 elections, when for the first time some British voters organized to give their votes to citizens of countries in Asia and Africa, who are affected by the policies of the UK government. In the 2012 elections in Israel, One World  initiated a similar campaign where Israeli citizens gave their vote to Palestinians of the West Bank, whose lives are extremely affected by Israeli policies, but who have no political influence over them. The campaign was covered in major media outlets such as the BBC, Haaretz and +972.  The campaign inspired similar initiatives in other countries, such as in the German elections of 2013.

In the 2015 Israeli elections, One World ran the campaign for a second time. This time Israelis gave their votes to a larger group of people whose lives are impacted by the Israeli government, including Palestinians, foreign workers and refugees living in Israel. Again, the campaign has achieved significant media attention with prime time radio interviews in leading radio stations such as Reshet-Bet and 103FM.